Version 0.4.2.187 of geewallet has just been published to the snap store! You can install it by looking for its name in the store or by installing it from the command line with `snap install geewallet`. It features a very simplistic and minimalistic UI/UX. Nothing very fancy, especially because it has a single codebase that targets many (potential) platforms, e.g. you can also find it in the Android App Store.

What was my motivation to create geewallet in the first place, around 2 years ago? Well, I was very excited about the “global computing platform” that Ethereum was promising. At the time, I thought it would be like the best replacement of Namecoin: decentralised naming system, but not just focusing on this aspect, but just bringing Turing-completeness so that you can build whatever you want on top of it, not just a key-value store. So then, I got ahold of some ethers to play with the platform. But by then, I didn’t find any wallet that I liked, especially when considering security. Most people were copy+pasting their private keys into a website (!) called MyEtherWallet. Not only this idea was terrifying (since you had to trust not just the security skills of the sysadmin who was in charge of the domain&server, but also that the developers of the software don’t turn rogue…), it was even worse than that, it was worse than using a normal hot wallet. And what I wanted was actually a cold wallet, a wallet that could run in an offline device, to make sure hacking it would be impossible (not faraday-cage-impossible, but reasonably impossible).

So there I did it, I created my own wallet.

After some weeks, I added bitcoin support on it thanks to the library NBitcoin (good work Nicholas!). After some months, I added a cross-platform UI besides the first archaic command-line frontend. These days it looks like this: 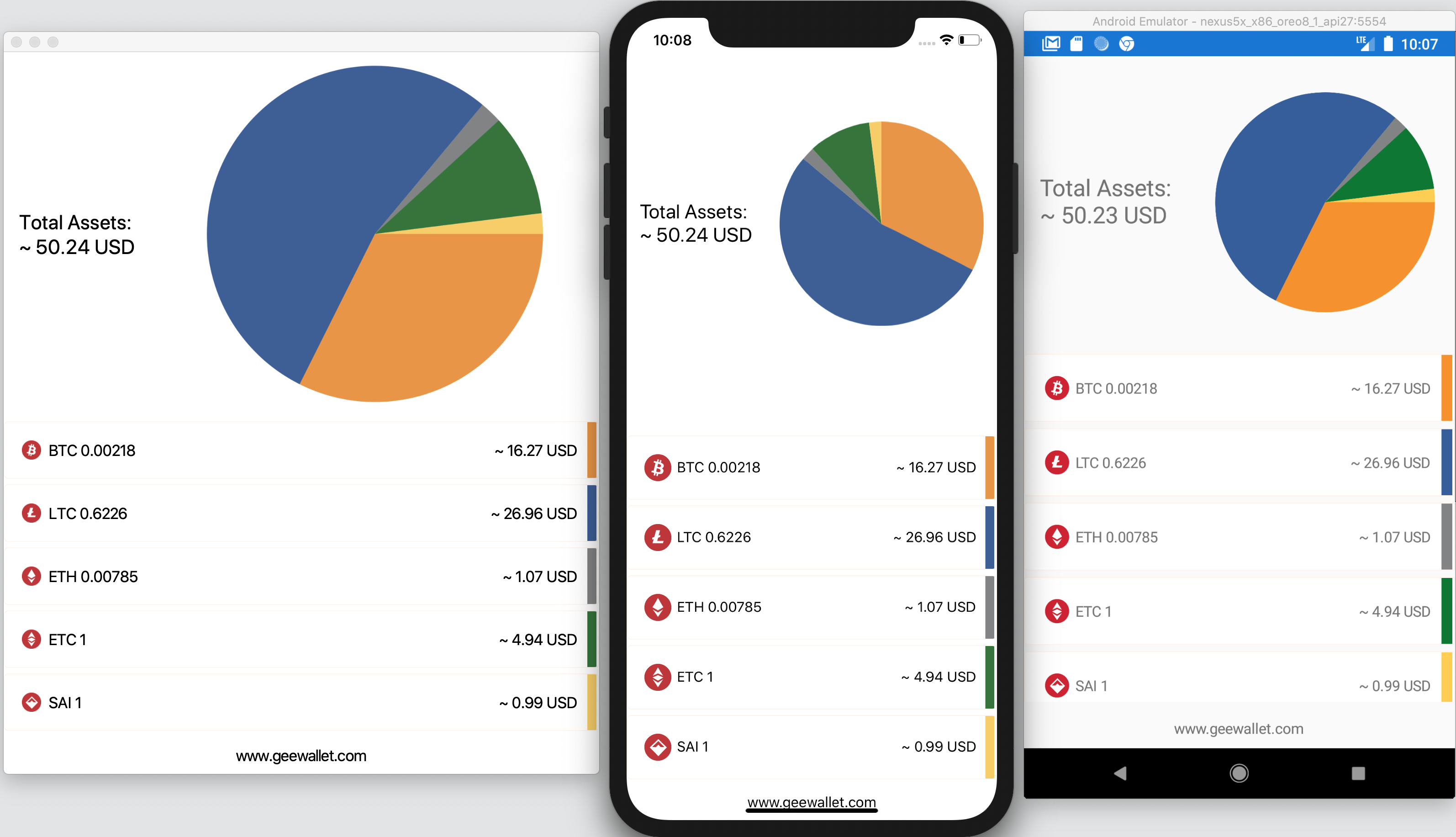 What was my motivation to make geewallet a brain wallet? Well, at the time (and maybe nowadays too, before I unveil this project at least), the only decent brain wallet out there that seemed sufficiently secure (against brute force attacks) was WarpWallet, from the Keybase company. If you don’t believe in their approach, they even have placed a bounty in a decently small passphrase (so if you ever think that this kind of wallet would be hacked, you would be certainly safe to think that any cracker would target this bounty first, before thinking of you). The worst of it, again, was that to be able to use it you had again to use a web interface, so you had the double-trust problem again. Now geewallet brings the same WarpWallet seed generation algorithm (backed by unit tests of course) but on a desktop/mobile approach, so that you can own the hardware where the seed is generated. No need to write anymore long seeds of random words in pieces of paper: your mind is the limit! (And of course geewallet will warn the user in case the passphrase is too short and simple: it even detects if all the words belong to the dictionary, to deter low entropy, from the human perspective.)

Why did I add support for Litecoin and Ethereum Classic to the wallet? First, let me tell you that bitcoin and ethereum, as technological innovations and network effects, are very difficult to beat. And in fact, I’m not a fan of the proliferation of dubious portrayed awesome new coins/tokens that claim to be as efficient and scalable as these first two. They would need not only to beat the network effect when it comes to users, but also developers (all the best cryptographers are working in Bitcoin and Ethereum technologies). However, Litecoin and Ethereum-Classic are so similar to Bitcoin and Ethereum, respectively, that adding support for them was less than a day’s work. And they are not completely irrelevant: Litecoin may bring zero-knowledge proofs in an upcoming update soon (plus, its fees are lower today, so it’s an alternative cheaper testnet with real value); and Ethereum-Classic has some inherent characteristics that may make it more decentralised than Ethereum in the long run (governance not following any cult of personality, plus it will remain as a Turing-complete platform on top of Proof Of Work, instead of switching to Proof of Stake; to understand why this is important, I recommend you to watch this video).

Another good reason of why I started something like this from scratch is because I wanted to use F# in a real open source project. I had been playing with it for a personal (private) project 2 years before starting this one, so I wanted to show the world that you can build a decent desktop app with simple and not too opinionated/academic functional programming. It reuses all the power of the .NET platform: you get debuggers, you can target mobile devices, you get immutability by default; all three in one, in this decade, at last. (BTW, everything is written in F#, even the build scripts.)

What’s the roadmap of geewallet? The most important topics I want to cover shortly are three:
With less priority:

Areas where I would love contributions from the community:

And just in case I wasn't clear:

I'm excited about the world of private-key management. I think we can do much better than what we have today: most people think of hardware wallets to be unhackable or cold storage, but most of them are used via USB or Bluetooth! Which means they are not actually cold storage, so software wallets with offline-support (also called air-gapped) are more secure! I think that eventually these tools will even merge with other ubiquitous tools with which we’re more familiar today: password managers!

You can follow the project on twitter (yes I promise I will start using this platform to publish updates).

PS: If you're still not convinced about these technologies or if you didn't understand that PoW video I posted earlier, I recommend you to go back to basics by watching this other video produced by a mathematician educator which explains it really well.
PS II: Apologies if this blogpost shows up in planets again, as it might be a side-effect of updating it to fix broken links or typos.