Subversion 1.5.0 highlights and some MD hacking

Subversion 1.5.0 has been recently released (June the 19th) and I'm surprised with the tons of great stuff it brings. Some highlights:


Don't you think this is AMAZING? This means we almost got full/real MOVE support and that merging is taking the best ideas from DVCS systems (yes, we lack yet local commits).

To get up to speed with DVCS features I would also add pending commits feature although there are concerns and people seem to prefer it to be implemented upstream in bug tracking tools.

Well, I guess you already may have noticed I don't like current DVCS tools (at least the most popular), by a different set of (a little bit subjective, I know) set of reasons:

- Git: it's implemented in an unmanaged language (yeah SVN too, but at least the latter is cross-platform!).
- Bazar & Mercurial: they're implemented in a "too-managed" language (yeah sorry I dislike dynamically typed languages very much, especially for big developments that need to have a long life; yeah, refactorings are a pain with these ones, although I don't know the test coverage they may have...).

I was discussing about this yesterday with JP, and when I talked to him about this SVN 1.5.0 he said "too late!". Ermmm, what?, Gnome hasn't switched to DVCS yet so, why too late? Maybe because it's imminent? I don't know. Sincerely, there is much contradiction about how people approach migrations... Today I've been attending for almost an hour a meeting about Gnome Mobile, and one thing that was arised is the lack of flexibility and ease of use of the Gtk+ toolkit, as opposed to other toolkits. People were concerned about it and wanted to fix it, and nobody wanted to give up pushing Gtk+ just because it's old. Then, why doing this for Subversion? Subversion is very mature, and their devs have demonstrated to be worried about its lack of flexibility wrt the new distributed ways of work, so they are fixing it, they are *supporting* us. And however at Guadec here it seems everybody wants to push for the migration (but only taking care of doing the correct decision, i.e., select the 1 from the 3 we all know, but why not considering just to update to new SVN and wait a bit more to see where we go?

Well, now that I'm talking about Subversion, I'm going to talk you about a couple of features I worked on recently (and committed today), as my first ITO day, in the Subversion Addin of MonoDevelop: revert to revision, and revert changes from a revision. The mandatory screenshot (you get to this dialog when requesting the Log inside the Version Control contextual menu):

This reduces the need of having a console open when coding with the MonoDevelop IDE, which is a thing that many developers request.

Another feature I completed is the new pattern for searching in many files inside MonoDevelop: Current project (previously we only had "Whole solution", "Directories" and "Open files"): 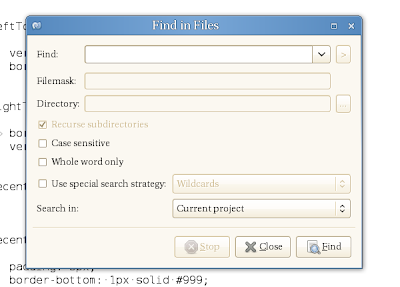 Enjoy them! (Currently on SVN.)